We are following Covid-19 Safety Protocols!

Tours are Private – only your group!

We are following Covid-19 Safety Protocols

Tours are Private - only your group!

My “Hebrew-zzesse” friend Sam and his wife Marlene, invited me over during Passover, a few years back, to taste a traditional dish called Matzoh Brei. I was so excited–I am always up to trying a new food I have never tasted.

Sam Cohen, is a lawyer and was professor of culture and gastronomy at Drexel University – he also taught hospitality law to restaurateurs in the City of Philadelphia. His wife Marlene, has taken some of my cooking classes in the City, and like me, prefers savory to sweet. 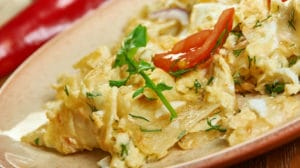 One thing is for sure, when I speak to Sam, I always learn more than originally anticipated; for which I am grateful!

Here are some things I learned about Passover from my dear friends: some Jewish people adhere to dietary restrictions year round, and during Passover, they refrain from eating anything that expands or absorbs moisture or leaven – nothing that rises like yeast is permitted. Wheat, barley, rye, oats and spelt are the five forbidden grains or “chametz”.   In some traditions, other foods like rice, millet, corn and beans are also prohibited. Observant Jews avoid even the appearance of impropriety, and because these “kiniot” foods can be ground up with flour, they are off the table during Passover.

When making matzoh for Passover, time is of the essence! As soon as the batter’s mixed up, they have 18 minutes to get it in the oven and baked – so it doesn’t rise! Rabbis watch this process of making matzoh and strictly adhere to the rules. Kosher is serious business.

Matzoh Brei is called different things in the Ashkenazi tradition – it has German and Russian Roots – No one knows the origin of this favorite Matzoh dish, but best guess is probably Russian – “because of the dish’s dairy component of butter and eggs – that’s always Russian,” Sam told me.

Matzoh Brei (pronounced Bray, Brie, or Bry) can be eaten for breakfast, lunch or dinner, savory or sweet.
The classic version is savory, matzoh, eggs and butter – options: dill, mushrooms, onions, asparagus, or any veggie.
Treat it like an omelete or a frittata —
The sweet version includes condiments like: Maple syrup, sugar, powdered sugar, jelly, jam, applesauce or cinnamon.

In medium sized frying pan, over medium heat, add butter.  When butter is melted add the matzoh and egg mixture and cook like you would an omelette or a frittata.

Sam was generous enough to let me film him during the process! Trust me, you don’t want to “passover” the great tips on this easy how-to video!  They reside in Italy now, and we wish them safe and happy holiday!

Cook Along with Chef Jacquie Live!