We are following Covid-19 Safety Protocols!

Tours are Private – only your group!

We are following Covid-19 Safety Protocols

Tours are Private - only your group!

The Earl of Sandwich

Did you know August is National Sandwich Month — perfect, who feels like cooking in August anyway? On average, Americans consume about 200 sandwiches a year…WOW! Every country has their version of a sandwich. In Italy, it’s the Panini; in Greece, it is the Gyro; of course, in America, the sandwich consists of everything from BLT’s to Lobster Rolls.

The sandwich became popular in America when bakeries started selling pre-sliced bread. They were an easy meal for workers and school children. The sandwich got its name from John Montagu (1718-1792), better known as the Fourth Earl of Sandwich. The original sandwich was a piece of salted beef between two slices of toasted bread. We celebrate National Sandwich Day on November 3rd, which is John Montagu’s birthday.

Sandwiches actually date back to 110 BC, during the reign of King Herrod. The Hillel sandwich was eaten during Passover; it was a simple combination of herbs and honey between two pieces of matzoh. Sandwiches are versatile, convenient and nutritious, great for lunch boxes, picnic baskets, and for snacking on the beach.
Below are some famous sandwiches and their history.

Probably created in US and, according to popular theory, originated at the Saratoga Club in Saratoga, NY, made with two slices of toast, according to American Cookery (1972), written by James Beard. The club sandwich came about through pure accident. A gentleman came home late one night and searched the kitchen and ice chest to see what he could make with whatever leftovers he found; he came up with couple slices of bread — which he toasted — a tomato, butter, mayonnaise, three slices cold broiled bacon, and a few pieces of cold chicken. He loved it so much, he told his friends, who were also members of Saratoga Club where they decided to make the sandwich at the club. They called it their experiment and referred to it as the club sandwich ever since…
Also known as a clubhouse sandwich, it is toasted bread, cut into quarters, with 2 layers separated by an additional slice of bread. Classic ingredients are turkey, bacon, lettuce, tomato and mayonnaise. The bottom layer can be alternate meats like chicken, ham, roast beef, hard-boiled egg slices; usually served with a side of coleslaw, potato chips and a pickle.

April is National BLT month! Even though the BLT is a direct descendant of The Club Sandwich and was served during Victorian times as tea sandwiches, this type of sandwich reaches as far back as Ancient Rome.

This is the Champagne of all sandwiches, the Lobster Roll, hailing from the New England Coast and one of the most decadent sandwiches ever created. The wealthier women of the 1800’s enjoyed lobster at their soirees, but didn’t want to get dirty eating the crustacean. They asked their cooks to come up with an alternative; hence, lobster salad. It wasn’t until 1912, when the soft hot dog bun was invented, that the lobster roll sandwich was born; cold chunks of fresh Maine Lobster in a light mayonnaise dressing, and stuffed into a toasted and buttered hot dog bun.

A modern favorite, the earliest recipes are found in Ancient Roman cookbooks. The grilled cheese, as we know it today, began during the 1920’s, when sliced bread and American cheese hit the market and were inexpensive. The most popular side dish to enjoy with grilled cheese is tomato soup, a bowl of Vitamin C. Nowadays, the grilled cheese can be served so many ways there are restaurants which specialize in them. The variations are endless from the traditional version to ones like fig and brie grilled cheese. 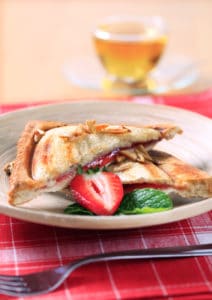 The origins of chicken salad can be traced back to ancient China.  We are more familiar with the new version created in 1863 in Wakefield, Rhode Island by Town Meats Owner, Liam Gray.  He mixed leftover chicken with mayo, tarragon and grapes and the rest is history.  Below is my favorite version of Chicken salad and it is my Mother-in-Law’s recipe.

Salt and pepper, to taste

Arugula and Strawberry Salad with Lemon Vinaigrette and Goat Cheese